Dooley was recognized for eight years of service in the Active Air Force and 25 years in the New York Air National Guard during a formal retirement ceremony on Friday, Sept. 18, 2020 at New York National Guard headquarters in Latham.

Air Force Major General Dawn Deskins, the deputy director of the Air National Guard, acted as the presiding officer for the retirement ceremony.

She praised Dooley's professionalism, "energy, and commitment to the mission." On Sept, 11 2001, for example, Dooley was the enlisted Airmen responsible for identifying hostile aircraft flying over the nation.

Throughout her career, Dooley has left a mark with many people, Deskins said.

"If we did not have COVID, this room would be filled to the rafters with people who wanted to be here," Deskins said.

In her remarks, Dooley thanked her family and friends for their support during her career, as well as those she served with.

"There is not a better profession than the profession of arms and not a greater group of people I would like to face those challenges with," she said.

During the ceremony she was presented with the Legion of Merit in recognition of her years of service, as well as gifts from those she served with.

Most of the force consists of traditional Air National Guardsmen who serve on a part-time basis, but others serve full-time to ensure readiness.

The New York Air National Guard also includes the Eastern Air Defense Sector, where Dooley had served, responsible for the air defense of the United States east of the Mississippi.

Dooley is a native of Danielson, Connecticut. After joining the Air Force in 1979 she served as an aircraft maintenance specialist on the F-4E and then the F-15 fighter and the T-33 training aircraft before leaving the active Air Force.

In 1994, Dooley enlisted in the New York Air National Guard and joined what was then the Northeast Air Defense Sector (NEADS), part of the North American Aerospace Defense Command, and is responsible for identifying and tracking aircraft flying over the United States and Canada. The unit directs fighters to defend North American airspace.

Dooley is a Distinguished Graduate of the Air Force Senior NCO Academy and holds a degree in Space Technology from the Community College of Air Force. 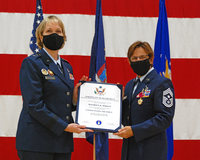