Dunn a communications systems maintainer assigned to the 101st Expeditionary Signal Battalion, will be attending a special course put on for international students annually.

He will spend six weeks in the Amazon rain forest learning how to navigate in the jungle, fight in the jungle and use rivers as travel routes through the jungle.

The Brazilian school, known as CIGS, the acronym for its Portuguese name -- Centro de Instrucao de Guerra na Selva-was founded in 1964, and is considered the top jungle training center in the world.

Each year the school conducts an abbreviated class for military personnel from around the world at its base in Manas, the capital of Brazil's Amazonas State.

The New York National Guard has been sending Soldiers and Airmen to the course since 2019 as part of its State Partnership Program training relationship with Brazil's military.

In civilian life, Dunn is a firefighter assigned to the Fire Department of the City of New York's Engine Company 303 in South Jamaica, Queens.

Dunn joined the New York Army National Guard in 2009. He deployed to Afghanistan in 2012-13 and to Kuwait in 2017-18.Dunn said he volunteered because he was also looking for a challenge.

"I just threw my hat in the ring and to my surprise I was picked," said Dunn, who is also qualified as a wheeled vehicle mechanic.

Seeking a challenge, and to get ready for the jungle warfare school, he also attended the Army's Air Assault School at Fort Campbell, Kentucky.

Dunn graduated that course along with 107 other Soldiers in August. He was the second oldest in the air assault class, the 37-year-old Dunn said.

"Sergeant Dunn is a professional, fit and motivated signal Soldier. His experience during two deployments, and as a civilian fire fighter will serve him well in high pressure situations during the Brazilian Jungle Warfare Course," Piwowarski said.

Soldiers who pass the jungle course are awarded a special knife called the "face, de Mateo". This is a Brazilian version of the Bowie knife with a jaguar headed handle made specifically for the jungle warfare center.

The emphasis on swimming at the class-which involves making rafts and swimming gear down rivers that are home to the crocodile-like Black caiman-prompted Dunn to modify his normal physical workout.

He normally focused a lot on weight training, Dunn said.

Now he's been borrowing his in-laws swimming pool to improve his swimming skills.

"I put my whole uniform on, and I have been jumping in there. And I will do a couple of hours of swimming," working on the free-style and butterfly stroke, as much as I can," Dunn said.

Dunn said that once he makes it past the initial swimming and physical fitness evaluation at the school, he anticipates his toughest challenge will be mastering patrolling and other tactical skills."I haven't had any real experience doing it. I just like that stuff," Dunn said.

Dunn will be joined at the school by Air National Guard Tech Sgt. Jeremy Miter, a Syracuse resident who is also a firefighter.

Dunn, who will be deploying once more with the 101st Signal next year, said he's looking forward to learning skills he can pass along to other Soldiers in his unit.

"I just want to do a good job out there, that is my biggest thing, to make my unit proud," Dunn said.

"I also hope the firehouse doesn't think I am just doing this to duck work," he added. 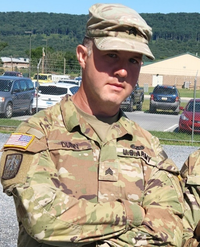