Latham, NY (09/08/2022) — Pietro [Peter] Marghella, a New Rochelle resident, Navy veteran, and expert on disaster medicine and public health, was promoted to the rank of captain in the New York Naval Militia during a September 7 ceremony at New York National Guard headquarters in Latham.

The New York Naval Militia is the naval component of New York's military forces. It is a state-only force, unlike the Army and Air National Guard which are also federal reserve forces.

Members of the Navy, Marine Corps, and Coast Guard can serve in the Naval Militia while serving in the federal reserve forces. Retired members of the naval services , like Marghella, can also join and serve.

Marghella retired from the Navy in 2005 as a commander after a career serving in a variety of positions.

These included plans, operations, and medical intelligence officer for the Navy Medical Service Corps, medical response advisor to the president onboard the National Airborne Operations Center, Director of Medical Contingency Operations for the Office of the Secretary of Defense, and Chief of Medical Plans and Operations for the Joint Chiefs of Staff.

Among his military decorations is the Defense Superior Service Medal, awarded for exceptionally superior service in a position of significant responsibility to the United States Government.

He joined the Naval Militia in July of 2021 and provided health care advice to the New York National Guard during the pandemic.

In civilian life he has worked at the Milken Institute School of Public Health in 2010 as a Professorial Lecturer.

He also holds faculty appointments in disaster medicine and public health preparedness in the Doctor of Health Sciences and Doctor of Science in Physician Assistant Studies at the Massachusetts College of Pharmacy and Health Sciences and The George C. Marshall Center for European Security Studies Program on Terrorism and International Security Studies.

He has served as a special advisor to the Governor of Puerto Rico in the wake of the 2017 l Hurricanes; Senior Advisor for Medical Planning and Preparedness for the International Medical Corps during the Ebola Virus Disease (crisis in West Africa; and Director of the New York State Office of Emergency Management.

Marghella holds a doctorate in health sciences in organizational behavior and leadership in public health preparedness from A.T. Still University; Master's degrees in National Security and Strategic Studies from the U.S. Naval War College and Healthcare Administration and Policy from Central Michigan University; and a Graduate Certificate in the Medical Management of Chemical, Biological, Radiological, Nuclear, and High-Explosive Weapons of Mass Destruction from the Uniformed Services University of the Health Sciences. 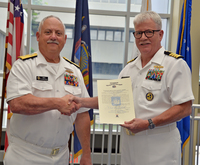