Hoosick Falls, NY (08/29/2019) — Ten Hoosick Falls area veterans were recognized for their service on Wednesday, August 28, during a ceremony at the former New York State Armory in Hoosick Falls by Major General Ray Shields, the Adjutant General of New York.

The Medal for Merit recognizes New Yorkers who received a high-level military award while serving in uniform. The Cold War certificate recognizes those who served in the military during the Cold War period.

"I think it is so important to recognize veterans and their service to our country and to do this," Shields said. "To take a few hours and drive up here to do this and present these awards is invaluable."

Those honored by Shields were:

• Elwin S. Bentley, a Korean War Navy veteran, who served in a Navy band and was awarded the NYS Medal for Merit and Cold War Certificate.

• Max Koch, a Navy veteran of the Korean War, who received the NYS Medal for Merit and the NYS Cold War Certificate.

• Steve G. Lemon, an Army veteran of the Persian Gulf War who received the NYS Medal for Merit, and the NYS Cold War Certificate.

• Charles J. Krawczyk, a veteran of the Vermont Army National Guard and the Navy who served in Afghanistan and Kuwait who received NYS Medal for Merit, and a NYS Cold War Certificate.

The morning ceremony was the idea of Mark Folgert, a Hoosick Falls resident.

He is a member of American Legion Post 40, which sponsors a weekly coffee club for area vets, and he met the ten veterans Shields honored during those gatherings, Folgert said.

The veterans had their federal awards, but he wanted to make sure that they also got the awards from New York they are entitled too, he explained.

"I think it is important that our older veterans, especially World War II and Korea are recognized, not only from the federal government, but it is important that the state of New York cares," Folgert said.The American Legion and the Hoosick Township Historic Society also helped him put together the award packages for the veterans and organize the event.

It was great to be honored, said Joan Madigan, a resident of Johnsonville, N.Y. who served in the Navy from 1952 to 1956. Madigan, who received a New York State Cold War certificate from Shields, handled classified messages during her Navy service.

"When you came home you just went back to your work and your normal life," she said. "Now they are starting to praise veterans more."

Photographs of the veterans receiving their awards can be found here:https://www.flickr.com/photos/nyng/albums/72157710589806471 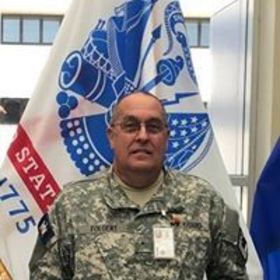