Lt. Col. Paul A. Mulligan, will replace Lt. Col. Michael J. Hastings, as the commander of the Expeditionary Signal Battalion, or ESB for short, which provides communication capabilities to the state during emergencies, and for our nation's forces in times of war.

Members of the press are invited to cover the ceremony.

WHO Lt. Col. Paul A. Mulligan, the incoming commander; Lt. Col. Michael J. Hastings, the outgoing commander; Col. Seth Morgulas, the Commander of the 369th Sustainment Brigade as the presiding officer; and leaders of the 53rd Troop Command and from around the state.

WHAT: A traditional change-of-command ceremony in which the colors, or flag, of the 101st Expeditionary Signal Battalion will be transferred from the outgoing commander to the incoming commander. Traditionally the unit colors indicate the commander's location on the battlefield. The traditional military ceremony allows the Soldiers to see who they will follow in battle. Hastings will pass the unit's colors to Morgulas, who will in turn hand them to Mulligan, symbolizing the transfer of authority for the battalion.

Still and video images of the ceremony. There will be an opportunity to interview both Hastings and Mulligan.

Members of the press must call Staff Sgt. Jonathan Pietrantoni at 516-655-1336 for access to this secure military facility. Press must have identification.

Lt. Col Paul Mulligan, who lives in East Greenbush near Albany, enlisted in the New York Army National Guard in May of 1999 and served as a Combat Medic, with Charlie Company, 2-108th Infantry Battalion. He later commissioned in the Signal Corps on May 18, 2003.

Mulligan is a graduate of Siena College, where he majored in Computer Science, and a minored in Psychology. He is currently completing studies for his Masters in Cybersecurity from Excelsior University.

He has also earned the German Armed Forces Badge, the Bronze Order of Mercury and is a veteran of Operation Iraqi Freedom (OIF III, 2004-2005) and Operation Enduring Freedom (OEF, 2012-2013).

Lt. Col. Michael J. Hastings recently returned from a deployment to the Middle East with the 42nd Infantry Division, where he served as the Division G6, which is the designation of the chief information officer. Hastings led design, operation and security of tactical and strategic communication networks across the Task Force Spartan area of operations.

In civilian life, Hastings, who lives in Mechanicville, near Albany, held vice president positions in Information Technology, Cyber Security and Risk Management at Bank of America and Berkshire Bank Corp.

He currently works as a cyber security advisor for the Department of Homeland Security, Critical Infrastructure Security Agency.

Hastings was commissioned as a second Lieutenant through the Reserve Officer Training Corps (ROTC) at Rensselaer Polytechnic Institute, and joined the New York Army National Guard in 2009.

From 2012 to 2013 Hastings deployed with the 101st Expeditionary Signal Battalion to Afghanistan in Support of Operation Enduring Freedom as officer-in-charge of network operations and information assurance officer.

Hastings holds a master's in business administration in Technology and Management from Rensselaer Polytechnic Institute and is a Certified Information Systems Security Professional. 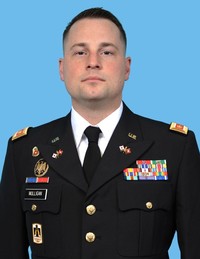