Miter, who serves with the 274th Air Support Operations Squadron at Hancock Field Air National Guard Base, will be attending a special six-week jungle school that the Brazilian military conducts for foreign troops.

The Brazilian school, known as CIGS, the acronym for its Portuguese name -- Centro de Instrucao de Guerra na Selva-was founded in 1964, and is considered the top jungle training center in the world.Each year the school conducts an abbreviated class for military personnel from around the world at its base in Manas, the capital of Brazil's Amazonas State.

Participants learn to navigate and survive in the jungle, while conducting patrols and tactical missions and learning to use the rivers to move about. There is a great emphasis on swimming in the class.The New York National Guard has been sending Soldiers and Airmen to the course since 2019 as part of its State Partnership Program training relationship with Brazil's military.

Miter is a joint tactical air controller, known as a JTAC for short. His job is to direct the attacks of MQ-9 remotely piloted aircraft, or manned bombers and fighter bombers, onto enemy forces on the ground.

Miter, 33, joined the New York Air National Guard in 2006 and served as a firefighter at the 109th Airlift Wing in Scotia, New York, until becoming a JTAC in 2010.

In his civilian job, Miter works at the Syracuse Fire Department's Station 3 on Bellevue Avenue.

Miter said he jumped at the chance to apply to attend the jungle warfare course.

"It is a great opportunity," he said. "It's a challenge and a different experience."

"He has the mental focus and physical strength that will allow him to be successful," Richardson said.

The emphasis on swimming at the school, which involves making rafts and swimming gear down rivers home to the crocodile-like black caiman, prompted Miter to modify his workouts.

"I changed to a lot of cardio and body weights, and I have been getting into the pool more and running," Miter said. "I won't say I'm a good swimmer, but I don't think I will drown."

Miter will be accompanied at the school by New York Army National Guard Sgt. William Dunn, who is also a firefighter in civilian life. Dunn serves with the New York City fire department in Queens.

Miter said he was able to get lots of advice on what to expect from fellow 274th member, Tech. Sgt. Paul Cange, who passed the course in 2021.

"The first week of getting through the physical requirements, that will be the biggest hurdle," Miter said. 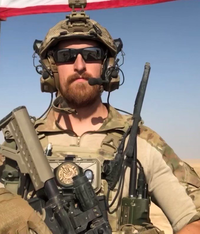